The following article as been re-posted by Animal Fire Rescue with commentary regarding items that are relative to Animal Rescue Training. 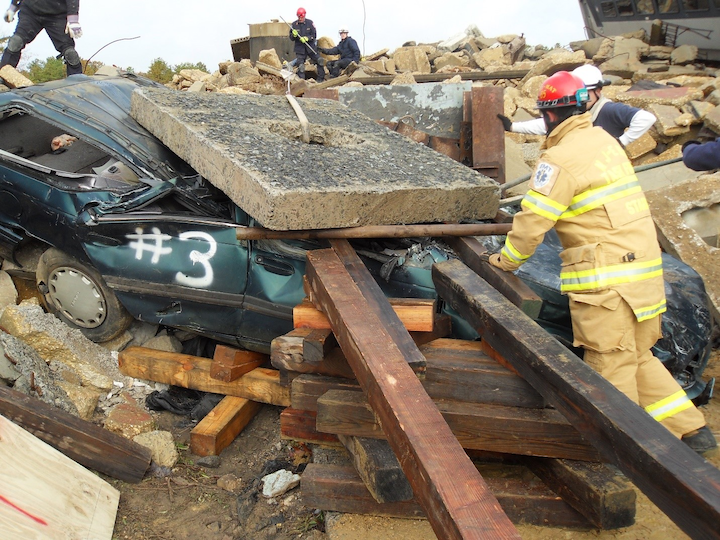 The ability of a rescue company to move an object involves physics, control, mechanical advantage and problem-solving. For example, utilizing rollers under heavy objects limits the friction between surfaces, assists in moving the object and helps in the control of the direction of movement. Use of an incline plane, or ramp, for the object to travel down allows for more controlled movement of the object.
Photos by Mike Daley

Many of the nation’s fire departments and rescue squads provide technical rescue services to their respective communities. Working in the world of rescue, a member understands that rescue is the science of alternative solutions; in layman’s terms, the answer to the issue that is entrapping the victim will require some creative methods that are beyond the everyday operations. Many times, the solution can be measured in inches or smaller for overall success. Furthermore, this solution requires displacing the object that’s providing the entrapment. Being able to move an object involves a significant level of physics, control, mechanical advantage (MA) and a theory of problem-solving.

Starting with the initial needs for movement of an object in any direction, my urban search and rescue (USAR) trainers instilled some basic rules from my “USAR Specialist Manual” when it comes to working against the forces of gravity, and these stand as true today as they did two decades ago:

These rules are set in a logical decision-making progression when it comes to making an object airborne; for the most part, the first rule applies whenever possible. However, when you can’t leave it, there are other aspects that must be considered:

A critical step in moving an object is determining the center of gravity of the object. To begin, the shape, size and density of the material out of which the object is made play a part in determining the center of gravity. This is the point where the horizontal, vertical and diagonal axis of the object intersect. If the object is uniform in size, it’s quite easy to determine this point; but on the rescue scene, many objects that need to be moved aren’t geometrically even. Some loads won’t be uniform, and some might have shifting loads (such as tanks that contain liquids) that constantly will affect this point. Many times during the operation, adjustments need to be made to the rigging points before moving the load.

The object’s weight is referred to as the measure (usually in pounds) of the force of gravity on the object. Basic physics teaches us that the larger the mass (weight) the greater the attractive force (gravity) that it will exert on other objects. Based on the density of the material that’s used in its construction, equal-size objects can vary greatly in weight. For example, let’s say that a team needs to lift off of a victim a concrete block that measures four feet long, two feet high and two feet wide. To determine the weight of this block, a variable accepted for reinforced concrete is 150 lbs./cu. ft. So, to calculate the weight of the block, multiply the dimensions together and then multiply by the variable (2 x 2 x 4 = 16, 16 x 150 = 2,400 lbs.). So, the method that’s utilized to lift this object must overcome 2,400 lbs. 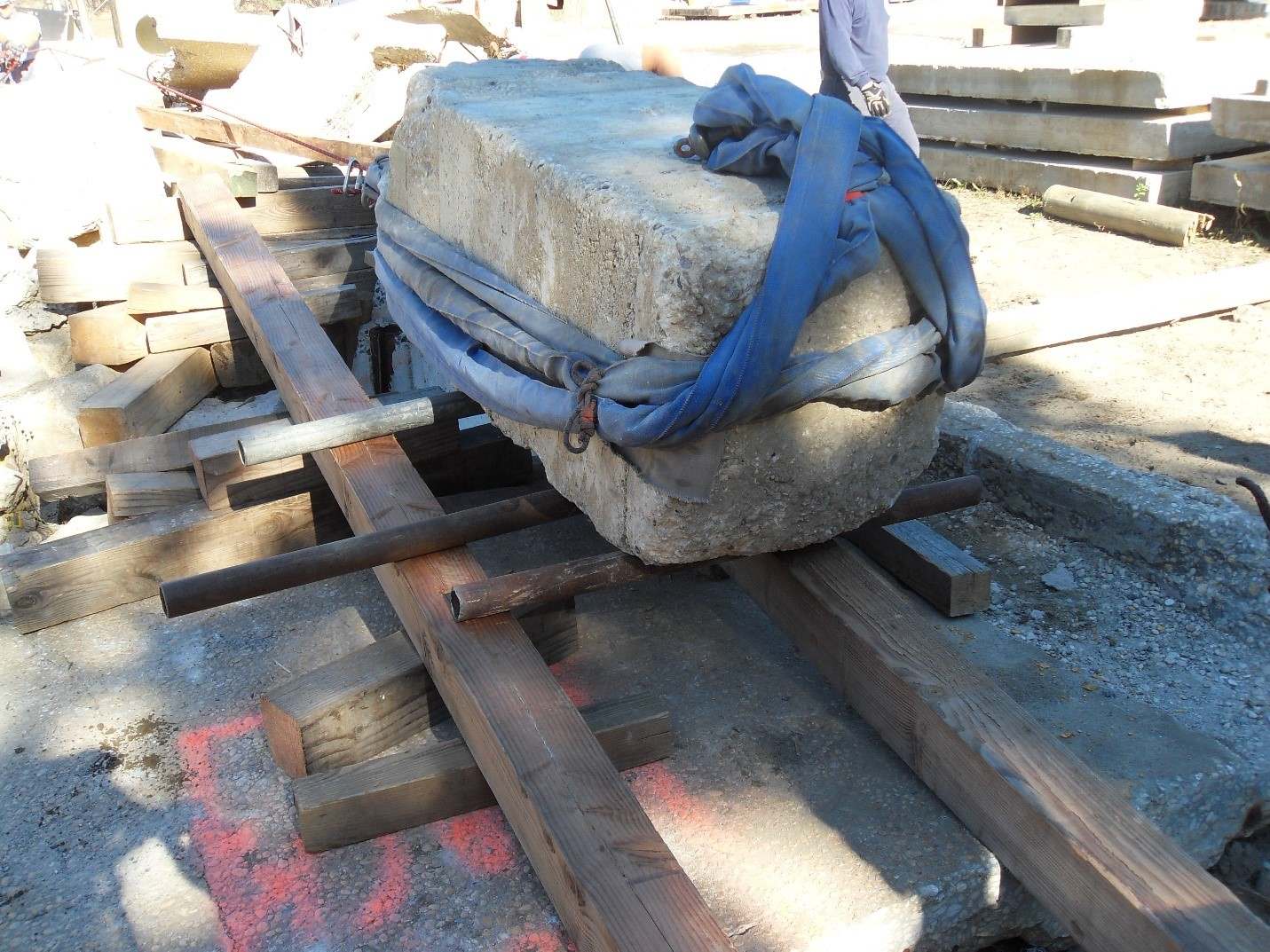 The weight of the object needs to be calculated to determine efficient movement operations and equipment capabilities.

Calculating the weight of the object to be moved helps to determine the next steps in removing the object.

Gravity must be overcome to lift an object, but gravity can assist the rescue team in the movement process. Gravity can be controlled by rescuers by constructing supporting rigging that can pace the speed by which the object is lowered. For example, brake bar racks can be utilized as friction devices to help to pace the downward motion of the object. Gravity also can serve as a movement force in certain applications. (Consider an elevator car that operates with a counterweight in the opposite direction of the car’s movement. The counterweight assists the elevator motor in moving the load.) 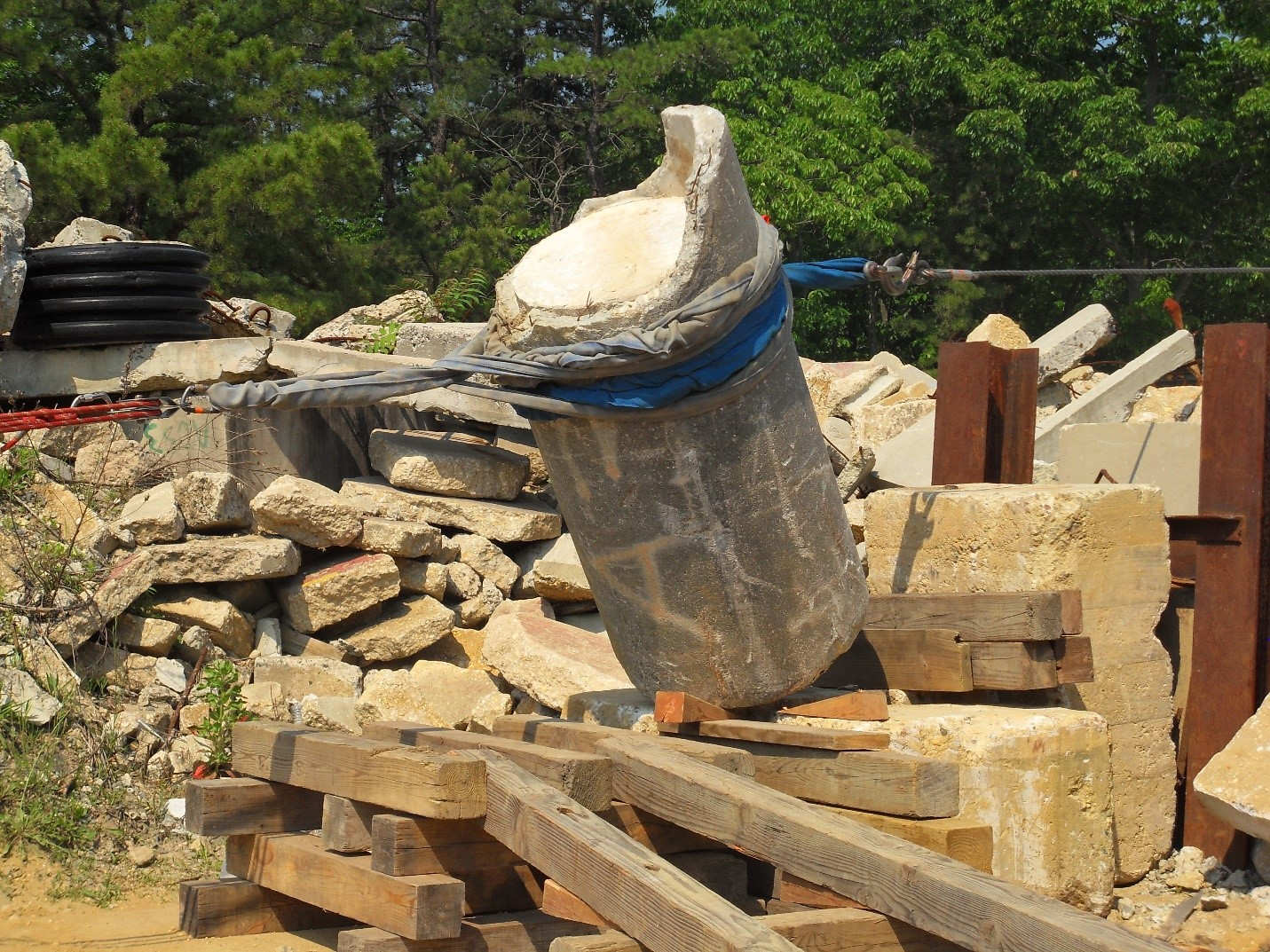 Many times, efficient skills in lifting and moving involve lowering an object. Here, a lowering system is deployed once the object passes beyond its neutral point to be controlled safely.

So, then, how do we determine how to lift/move/push/pull the aforementioned object? We need to overcome 2,400 lbs. to achieve this. So, what are our options? Well, as a rule, most rescuers safely can move 50 lbs. (controlled) in any direction. (One can debate this number, but this takes into consideration wet and uneven topography, long-duration operations, debris-laden floors and other hazards that are associated with the rescue scene.) If we were to lift this object with just brute force, we would need a ridiculous amount of personnel to do this. So, we must rely on simple machines and MA, which works as a force multiplier on the load that’s being moved.

Let’s use a simple Class I lever as our machine. The lever consists of four parts: the lever itself, the fulcrum point, the applied force and the load point of contact. The MA is determined by the fulcrum point location; if the fulcrum is placed at the halfway point, there is no MA: force in would equal force out. Therefore, for our scenario, we will utilize a 14-foot-long 6 x 6 timber as our lever, and the fulcrum point will be two feet from the load. The resulting MA of the lever would be 14/2 = 7:1. Dividing the load to be moved by the MA, the needed force applied to move the object would be 2,400/7 = approximately 350 lbs. Approximately seven rescuers would be needed to apply force to the lever in this setting to get the object to move in the direction that’s desired. 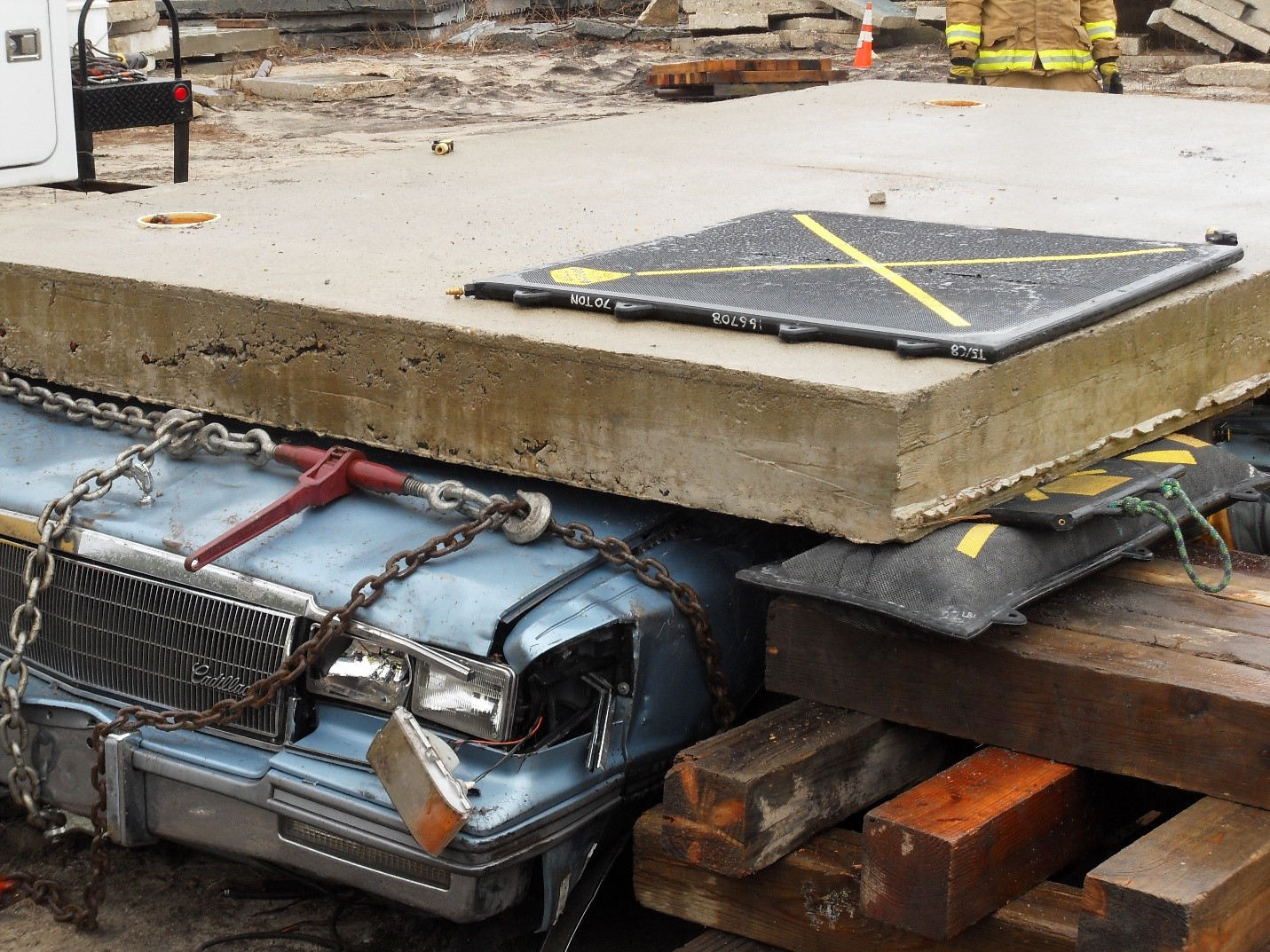 Use of pneumatic bags can assist in moving heavy objects on the rescue scene.

Whether a rescue team utilizes pneumatic air bags, rope MA systems, levers or hydraulic jacking equipment, it’s imperative that the weight of the load that’s being lifted be calculated. That way, the operation can be done safely, and the equipment that’s utilized can handle the stresses that are placed upon them to move the object.

Additionally, as a rule in rescue, when we lift an inch, we crib/capture the inch; cribbing materials and stabilization equipment must be deployed as the lift is taking place to avoid catastrophic results should the lifting system that’s being used experience a failure. 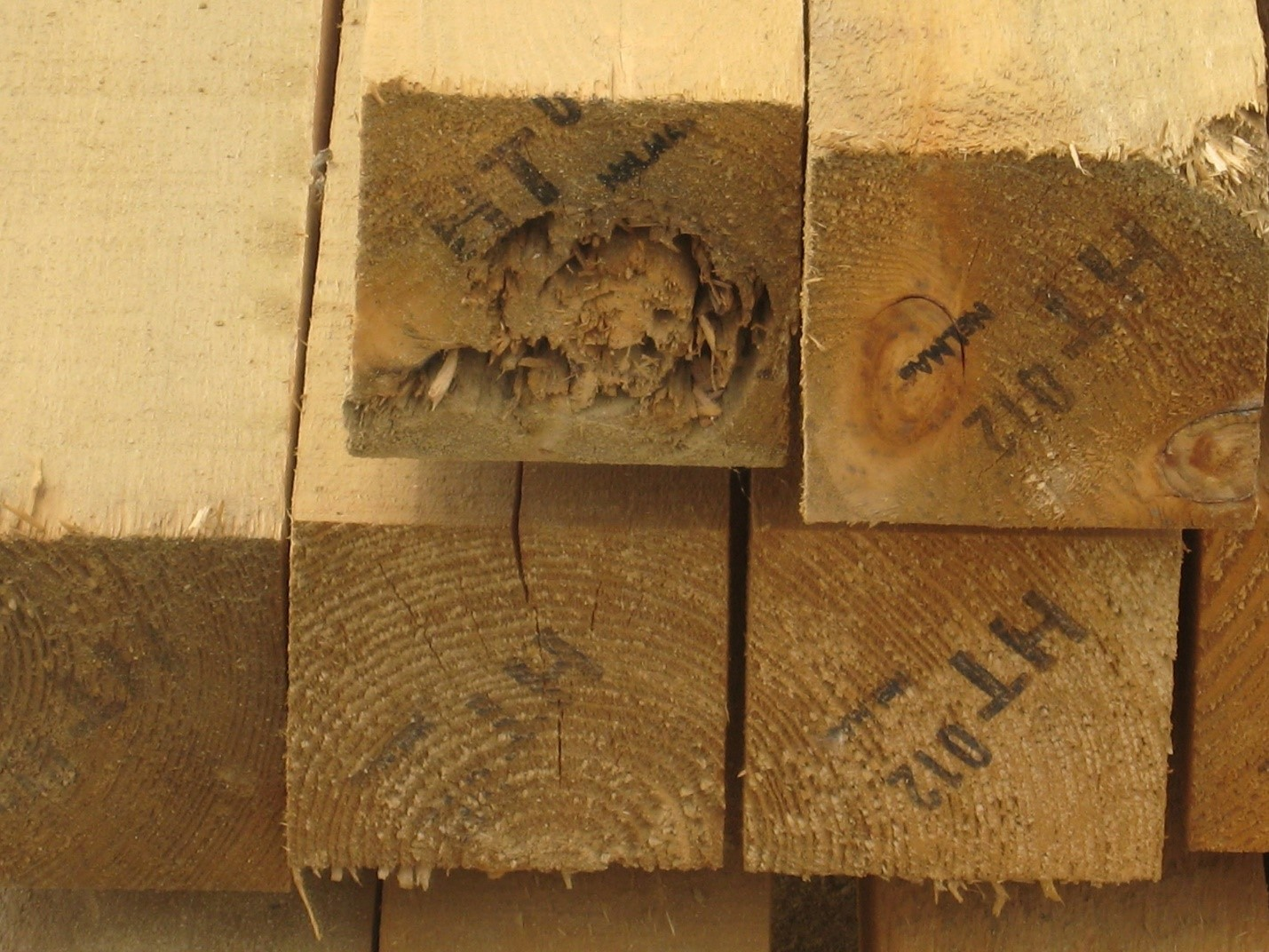 Every system has a point of diminishing return that renders a system ineffective. Timber can be used for cribbing or lifting, but it must have sufficient strength to do the job, or it will fail, as the piece of timber at top center has. A minimum of eight rings per inch is suggested for strength in timber, and no rot or decay should be present.

In some settings, it might be necessary to displace an object horizontally to gain access to a victim. Although it still is imperative to calculate the object’s weight, another obstacle that must be overcome is the friction that the object has against the surface it’s resting upon. The friction is the tangential force between the two surfaces that resists the motion of an object. The amount of friction is related directly to the amount of weight that the object is exerting.

It’s up to the rescuer to understand the best method of defeating friction. One example is having a liquid between the two surfaces. Consider the treads on a tire on a vehicle. The treads allow the water to be displaced, so the surface of the tire can maintain contact with the roadway. Many people have experienced icy road conditions that can reduce or even nullify the friction that’s between the tires and the asphalt.

Another method that’s more common on the rescue scene is placing rollers (pipes) between the object and the mating surface. This provides two advantages: the surface area that’s between the two surfaces is reduced, which lessens the friction; and the rollers are placed roughly 24 inches apart, so the rollers will turn and allow the object to move much more easily.

One example of a simple machine that can move an object both vertically and horizontally is an inclined plane. Although it’s the least complicated of all machines, it is one of the least efficient because of the large amount of surface-area contact between the plane and the object. 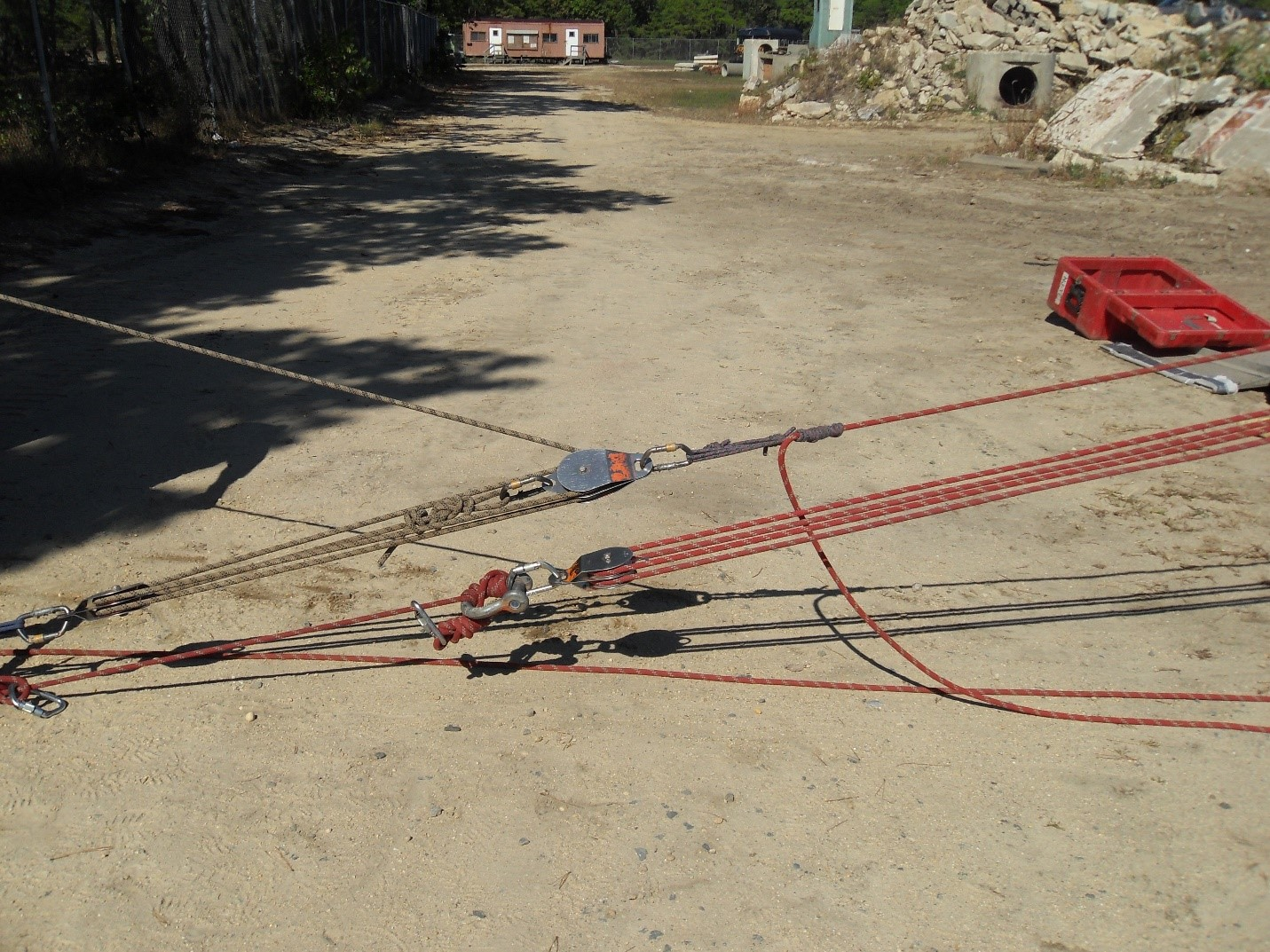 Compound and complex mechanical advantage (MA) systems can be made from rope and associated equipment to multiply forces that are put onto objects.

When moving an object horizontally, it’s important to control the speed of motion, so the object doesn’t increase speed beyond the forces that are applied. In this case, a tensioned system should be utilized to manage the overall speed of motion.

When it comes to efficiency, the action plan must be realistic. Every system has a point of diminishing return that renders the system ineffective. For example, a rescue team that’s lifting a 2,000-lb. concrete block with a Class I lever wouldn’t use a 16-foot 2 x 4 as the lever, because the material would be too weak and would fail quickly. Conversely, we wouldn’t request a 75-ton lattice boom crane to lift the 2,000-lb. block, because the crane would be too heavy and complex for the assignment. Additionally, we wouldn’t expect to amass 40 rescuers to join hands and lift the block, because there would be way too much “fuel” for the machine to be utilized.

Therefore, it’s important to consider the objective for realistic results, utilizing the system with the maximum amount of efficiency for the task at hand.

The maneuvers that are discussed here don’t represent an all-encompassing description of options. They only scratch the surface of potential lifting and moving skills for the rescue scene. 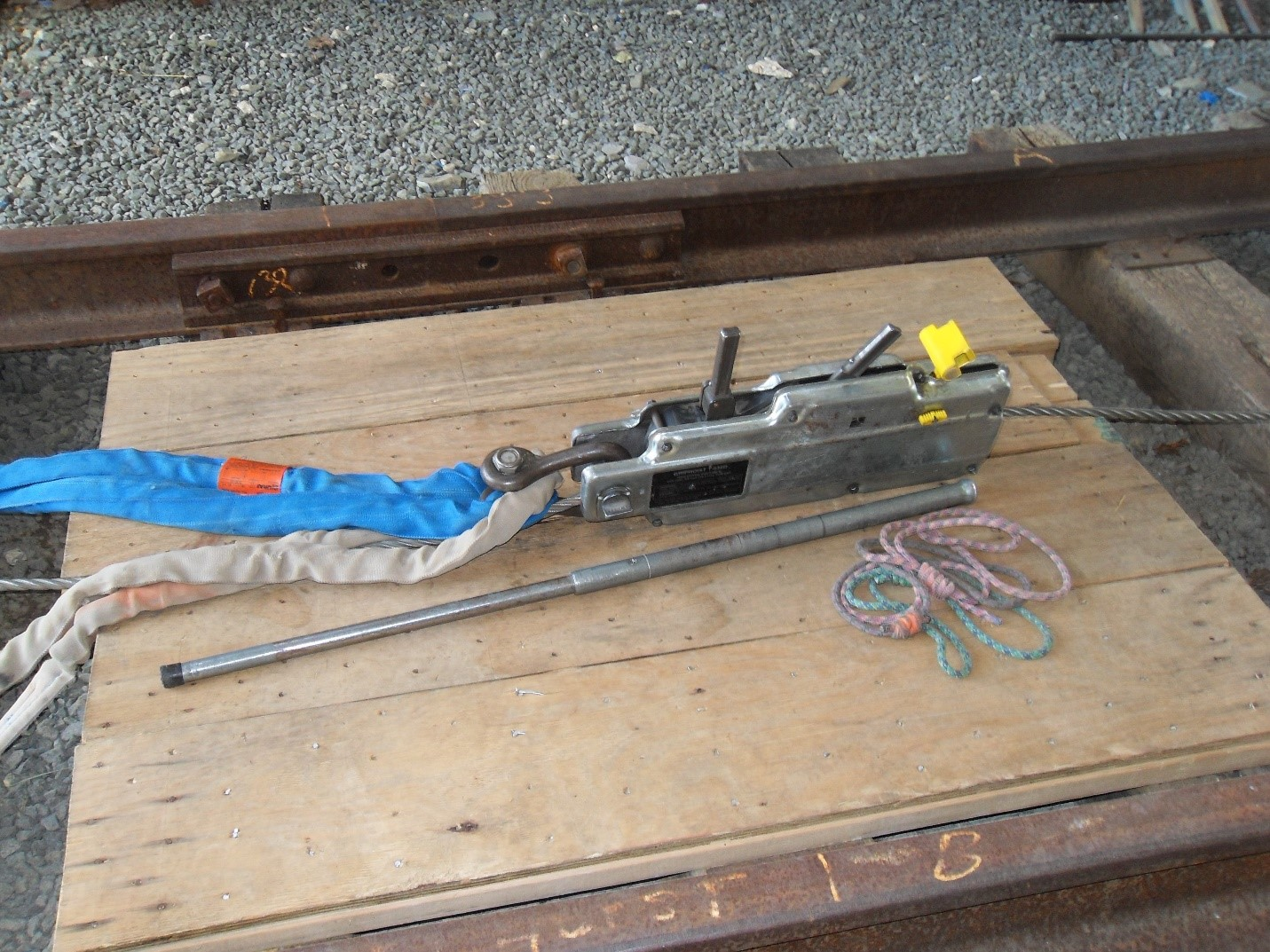 This griphoist is an example of a device that can be utilized to provide a controlled lift as well as the lowering of an object.

It’s highly recommended that emergency responders continually update their skills in the area of lifting and moving techniques. Identification of all hazards and application of current rescue skills are used in coordination with patient care for the most successful outcome on scene. A competent rescuer is skilled in weight calculations, multiple types of MA systems and equipment and the most efficient method to deploy these systems